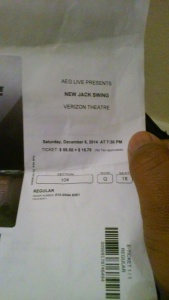 I was so ill prepared for this concert. I originally planned to go all out for this! It did not happen that way. I also had a very busy day. Well, me and mom, author Virginia Elaine Johnson-Lee(Me, Myself, and I) purchased some last minute items before both of us finally stopped and cooked dinner for the family. I started getting ready for the concert as she slept. As time  approached the start of the New Jack Swing concert, I could not find my new eyeliner. As a result, I did a whack job on my face. I wanted to create a « smoky » look and I failed dismally.

To make matters worse, me and author Virginia Elaine Johnson-Lee were late for the concert. The parking lot was packed! As we approached the parking part for general parking, we were shocked to find out that it costed $15.00 to park! Oh, my God! Anyway, after all of that confusion we finally made it inside of the concert hall and was shown where we needed to sit. Surprise! The concert hadn’t started yet! Both of us got great seats up front. However, author Virginia Elaine Johnson-Lee was seated slap right in the very front row! She got a chance to see every damn thing! Now that made me a tad bit envious!

No sweat. I got a good seat, too, except for the fact that by me sitting at the end of the row, I had to keep getting up during the entire concert because some people just don’t know how to get their shit and whatnot before the concert starts!

The lights went out and I was anticipating and in total suspense about who was going to perform first. Then, the concert began! The first performer to kick off the concert was my favorite singer Al B. Sure! Woooooooooooooooooohoooooooooooooooooo! Oh, my fucking God! Ow! Oh, my damn! The music started and I believe that Al B. Sure! was rapping. For a moment I thought Slick Rick was up there saying « La-di-da-di. » Not only can sexy crooner Al B. Sure! sing, he can also rap! So, it was a treat to hear him rap (years ago I read that he started out wanting to rap before killing us ladies softly with his beautiful singing)! Daaaaaaaaaaaaaaaaym! I loved the way Al B. Sure! sang « Nite And Day » to the remixes that were made of this same song (that was remixed by other artists who remixed « Nite And Day »), too. That just intensified the experience for me.

There were two other guys who were singing with Al on different songs. I think that one of the other singers was Lil B. Sure. I don’t know if the other guy was his son Quincy or not. But, I did wish that Al did more singing in all of his songs. The magic part of the night happened when there was like magnified screaming in the front row that spread to my row. Al B. went into the audience to greet us fans! He finally reached my side. I wasn’t sure if it was going to happen or not, but I moved to the side and stuck my hand out, and lo and Behold! :

Al B. Sure! shook my hand! Oh, my God! I was so elated! It was such a joyous occasion! Stupendous! Oh, my gaaaaaaaaaaaaaaaaaaaaaaaaawd! Laaaaaaaaaaaaaaaaaaaaaaaaaaaaaaaawd! Lord have mercy! I didn’t want to wash my hands after that. It was like I shook a golden hand or something. I felt like I won the world lottery! Man, what a special moment in time! That made my century! This was definitely the highlight of the night for me! However, there was one thing that pissed me off though. In the middle of my favorite song « Nite And Day », I was starting to get pissed off because numerous people in my aisle were so fucking rude!

They kept moving out of the aisle and leaving to do whatever for whatever fucking reason! I was like « Couldn’t they go piss or do someone else’s beer run during intermission »? Shit! How fucking rude! Other than that, shaking Al B. Sure’s! hand was a moment in time that I hope I will never forget. Also, I loved when Barry White’s part from the song « Secret Garden » was played. That took me back down memory lane. I love that song. I had to go to this concert. I always wanted to go to an Al B. Sure! concert since I was a 12 year old in junior high school. Back then, I believe there was a concert in Oklahoma City, OK that had a show lineup consisting of Al B. Sure!, Guy, New Edition, and maybe one more person or group. I think the other person was Bobby Brown.

That was back in 1987 or 1988. Yeah, I remember. I wanted to go soooooooooooooooo bad! Damn! Well, fastforward 27 years. I finally got a chance to go(minus the other groups)! This was an even better lineup, though this time around. I just wish that Heavy D. was alive though(May he rest in peace). That would have been the ultimate lineup if it included Heavy D. if he were alive. Next, I hope that Al doesn’t think that he is an old man! He was mentioning the fact that he is older. He may be a little older, but « he still got it goin’ on »!

Wow! I was really impressed with these guys! They sounded just like what I have heard on the radio when their songs are played! I mean these guys were excellent! These guys glittered and dazzled! One of the members had a rhinestone tie on or something(I think)! It was gorgeous! I sat in the audience continuously saying, « That was nice! » After 7 reminded me of the Temptations a little bit. However, I think that some of After 7’s music is better. After 7’s music combined with their Temptations-like moves was a nice touch. These guys looked great, too! You know, eventhough I do not know these guys personally, I was really proud of them.

And, they didn’t veer off from singing their songs or anything. Wonderful! Just wonderful! Nice. Author Virginia Elaine Johnson-Lee even mentioned how these guys looked great and have the most beautiful set of pearly white teeth. I think that there were two of them that she really liked and one of them was really good looking to her.

These guys really are great to hear in person. They are fantastic as a group/band, the whole nine yards! I was glad to hear them sing my favorite songs(« It Never Rains In Southern California » and « Anniversary »). Also, I liked the fact that peace was encouraged. I enjoyed putting up my peace sign and waving it in the air. It brought me back in time when I was a child growing up in Los Angeles, California. Back then, the elementary school that I attended held functions in the auditorium and other places in Lauren Miller Elementary school.

To continue, school officials and teachers encouraged students to keep peace and hold up peace signs with our fingers. Last but not least, thank God these guys are still together after all of these years. It is truly wonderful to see this! This is one wonderful band! My favorite song totally from this group is « Whatever You Want ». It was sung sooooooooooooooooooooooooooooooooooooooo nice. There was a guitar solo, also. Excellent guitar playing! Just excellent!

For some split seconds there, I felt like I was in a heavy metal concert. during that heavy metal sounding solo I got caught up in the moment and did my « Beavis and Butthead » heavy metal dance. Kudos to this fantabulous group straight outta Oakland, California: Tony Toni Tone`!

Aaron Hall still « got it »! He sang almost all of my favorite songs from the group Guy. And, he is still unbelievably talented. I wanted him and his brother Damion « crazy legs » Hall to do a lot more dancing along with the songs though. Aaron did do a little dancing and was very good at it! Back in the 1990’s I read and heard about his « bumping and grinding » stunts that were performed onstage while on tour. Well, he did it! And, he didn’t miss a beat! So, I got the chance to see what all of the ladies were going crazy about during his past concert performances back in the day.

Now, there was definitely something that I was not sure about: I was not sure if Damion Hall was there at all and I didn’t hear anything about Teddy Riley. Also, I must mention that Timmy Gatling was also an original member of the group Guy. However, he has not been seen for years at all! Yep, he is the one who originally sang my favorite Guy song « You Can Call Me Crazy ». Furthermore, I am sure that if Teddy Riley were at the concert, Teddy’s Jam II would have been played in its entirety and stuff.

Yet, I had hoped that since the 90’s was a wonderful and unique era for song and dance, the group Guy would have had some back-up dancers to dance along with them on some of their funky dance tracks(dancing 90’s style). But that did not happen. Aaron had this back in the day. It was all good though, eventhough all of the original members of Guy were not all present to perform. Despite this, Aaron and the other guy performed wonderfully. Eventhough Aaron mentioned the fact that he is almost 50, he is not old at all. Fifty is the new 30! Age 90 is old!

What an amazing singing voice this man has! I felt like I was sitting up in church getting ready to get the holy spirit for a moment during parts of his performances! That man can sing his ass off! All in all, each and every performer was totally « off the chain »! And, author Virginia Elaine Johnson-Lee was impressed by how well all of the entertainers looked and how beautiful all of their teeth were. And, Al B. Sure! is a cutie! And there it is and there it was: The New Jack Swing Concert starring……Al B. Sure!, Guy, Tony Toni Tone`, and After 7!

These guys came out in an era where lyrics still meant something and made sense in music, where there was such passion in the music and where you could see it in the videos. Man, their music truly is music!

Check out everything about me at http://about.me/kinggalaxius Voir tous les articles par King- Galaxius Stravinsky

HONEST, FIERY STORIES FOR THE FLAWED.