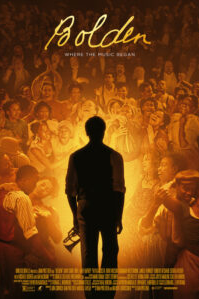 Story:  The film is set in 1931 New Orleans, when Buddy Bolden, a long-time asylum inmate, hears the strains of a Louis Armstrong concert drift into his room from the radio in a nearby nurse’s station. The sound evokes memories of his long-forgotten youth as a ground-breaking cornetist, when he played and improvised his way to the forefront of a new musical style, ultimately creating what would evolve decades later into jazz.